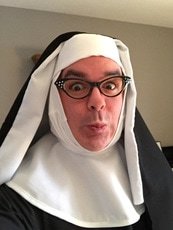 Jason M Barnsley was born at an early age in Regina Saskatchewan. It is said that at the moment of his birth, the skies were rent apart by a flurry of white, which ended up being a seagull crapping on the hospital window. Jason was adopted at age 2 months, so he packed his bags and went to live and work on the Barnsley Family Farm 25 miles south of Lloydminster AB/SK. His formative years on the farm were spent playing with pet salamanders, doing "wonderful" manual labour and learning that the verse "spare the rod; spoil the child" should really have read, "Spare the wooden spoon, and you'll have less ass hairs in the porridge."

His formative church years were spent at Grace United Church in Lloydminster where he started playing handbells at age 10. By age 12 he had graduated to singing Bass with the senior choir, which is when his hair turned grey, so he could blend in (peer pressure). By age 14 he began playing the organ in church regularly, though it took a few Sunday's and several chance meetings with the wooden spoon, to learn that "Roll out the Barrel" wasn't really acceptable as an offertory, and playing "Pop Goes the Weasel" at a funeral was definitely frowned upon. To be fair, it was the only song he knew at the time, and to this day, Jason still enjoys a good polka.

Jason decided that he'd better learn more than one polka for Offertories, so he traveled to the United States to study sacred Music and Theatre at a small liberal arts college outside of Philadelphia, in the Amish countryside near Reading, Pennsylvania. He doesn't often speak of his interactions with the Amish, as they were very stern and quite apt to bring out the wooden spoon if you smiled at them. Jason worked for a variety of denominations through and after college from Non-denominational to Episcopalian to Lutheran. His other degree in Theatre meant he got to hang out with really cool American beatnik types who marveled at his stories of Canadian Moose, Wooden Spoons and Seagulls.

After spending 18 years in the US, having learned his trade of Pipe Organ Building, and honed his music ministry skills, and having spent enough time working in professional theatre, he decided to return to Canada and to his roots. Upon his return to Canada, the skies were once again rent apart by a flurry of white, and he was crapped upon by a seagull, confirming that he knew that he was where he was meant to be. Jason moved to Calgary and immediately fell into a rough crowd of musicians and weird beatnik types at the National Music Centre where he is known as the "dude who plays the theatre organ", and where he takes care of the exhibits. He also operates his own Pipe Organ Building firm in Calgary. After a recent vision quest, Jason was annoyed to discover that his spirit guide was a Seagull.